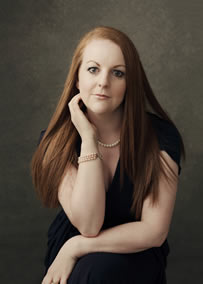 Julia O'Connor is a Soprano who is much in demand around the South West. She studied music at York University and later with English National Opera under Mary King.

Julia has performed the Soprano solos in all of the great Oratorio works in Surrey, Kent, London and the South West, including works by Mozart, Haydn, Bach, Britten, Poulenc, Tippet, Brahms and many others.

Equally at home on the stage Julia has performed the roles of Don Ramiro (as a travesty role) in Rossini’s La Cenerentola with Red Earth Opera in Devon, Mimi in Puccini’s much-loved opera La Bohème, the title role in Janacek’s Jenůfa, Beatrice in Berlioz's Beatrice and Benedict, Ellen Orford in Bath Opera’s NODA award winning production of Britten's Peter Grimes, Belinda in Dido & Aeneas, Lady in The Fairy Queen, Queen of the Night in The Magic Flute, Mabel in Pirates of Penzance, Flora in La Traviata and Cousin in Madam Butterfly.

This year Julia will be touring Mozart’s comic opera Così fan Tutte in the summer as Fiordiligi and playing Woglinde in Wagner’s Das Rheingold with Tarnhelm Opera touring cathedrals in the South West during October and November.

More information about Julia and details about her teaching practice can be found at www.juliaoconnorsoprano.co.uk.