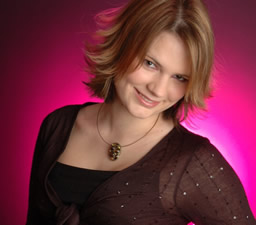 Born in Germany, Sophie was a founding member of the Stuttgart Youth Opera, where she sang in the chorus between 1997 and 2001.
In 2002 Sophie accepted a place at the Royal Welsh College of Music and Drama, and went on to complete a Master of Music at the college.
In April 2006, Sophie travelled to Italy to perform William Walton’s Façade for the composer’s widow, Lady Susanna Walton, in her home on Ischia.

Sophie has regularly appeared as a soloist at the Hoddinott Hall and St David’s Hall with the BBC National Chorus of Wales and has recorded Mansel Thomas’ Requiem for Radio 3, Radio Cymru and BBC Radio Wales. She has also performed live on BBC Radio 4 in a broadcast of Songs of Worship.

Sophie has turned her hand to many types of music: She was the soloist in the RWCMD Jazz band directed by Keith Tippet as well as performing as a backing vocalist for Rod Stewart at the Millennium Stadium.
Operatic roles include Antonia (Tales of Hoffman), Senta (The Flying Dutchman), Serafina (Il Campanello di Notte), Michaela (Carmen) with Bristol Opera, Hansel (Hansel and Gretel), Dorabella (Cosi Fan Tutte) with Tessitoura and Cio Cio San (Madame Butterfly) with Bath Opera.
Other soloist works include B minor Mass, Carmina Burana and Dixit Dominus.

In the past year, Sophie has spearheaded an educational project for Tessitoura based around César Cui’s Puss in Boots, a fairytale opera for children. It offers whole classes of primary school children the chance after a series of workshops to take part in a performance of the work at their own school.

Sophie is currently learning the role of Alice for Tessitoura’s production of Verdi’s Falstaff in July 2018.