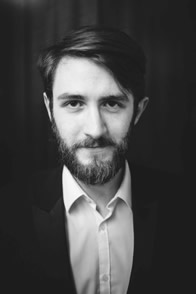 William Stevens is a singer, conductor and vocal coach based in Cardiff. He currently studies singing at the Royal Welsh College of Music and Drama with baritone Donald Maxwell. An experienced choral singer, he is a member of the back row of Llandaff Cathedral Choir and an alumnus of Genesis Sixteen. His varied operatic roles include the title role in Mozart’s Don Giovanni, Don Alfonso in Mozart’s Così fan tutte, Count Almaviva in Mozart’s Le nozze di Figaro, Nick Shadow in Stravinsky’s The Rake’s Progress, Olin Blitch in Floyd’s Susannah, Falstaff in Holst’s At the Boar’s Head and Don Magnifico in Rossini’s La Cenerentola. Outside of opera he has performed as the title role in Sondheim’s Sweeney Todd and various Gilbert and Sullivan roles including Pooh-Bah in The Mikado, The Pirate King in The Pirates of Penzance, Robin Oakapple in Ruddigore and Sir Joseph Porter in HMS Pinafore. Significant engagements as a conductor include the requiems of Brahms, Fauré and Victoria, Pärt’s Passio, Tchaikovsky’s Eugene Onegin and Sullivan’s Patience.